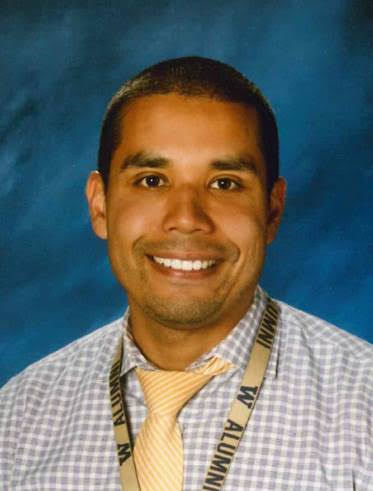 College Place Public Schools announced today that they have hired Robert Aguilar as the next College Place High School Principal.

College Place Public Schools conducted an extensive search and a very transparent interview process that included feedback from all stakeholders. There was a key interview team, student led tours and interviews, staff lunches with the candidates, a meet and greet with the CPHS Parent Advisory Group, the Superintendent Advisory Team and the School Board members followed by a community forum for parents, students, staff and the community.

Superintendent Payne stated “I was very impressed with the process and received overwhelming positive feedback from multiple references for Mr. Aguilar. Robert has a lot of energy for what we are doing here at College Place High School and we look forward to having him be part of our team.”

Mr. Aguilar’s wife Jessica, also has ties to the area as she attended Whitman College and graduated in 2005. They have  two sons, Alexander 4 and William 2, and they are expecting a baby girl in May. In his spare time, Mr Aguilar enjoys CrossFit, or playing with his kids at a local park.

Aguilar states, “I am very excited to be returning to the Walla Walla Valley and look forward to serving the community of College Place, working with our students, staff, and families to prepare our kids to thrive in a 21st century global economy and contribute to their communities with character and integrity.”

Mr. Aguilar will begin his contract with College Place Public Schools on July 1, 2019. Mr. Kasenga will continue to act as the interim principal at CPHS until the end of the school year.